November 3rd is National Sandwich Day, so we wanted to see just what the nation had to offer between two slices of bread (or otherwise). Here’s a look into some of our favorite, regional rock star sammies.

From the kitchen on the Brown Hotel in Louisville comes the famous cheesy, open-faced sandwich. It’s comfort food at its best: turkey and bacon on a slice of bread, covered in Mornay sauce and thrown under the broiler. A popular variation includes topping it with a slice of tomato as well. You know it’s ready when the cheese sauce starts to brown!

On the surface, this St. Louis staple seems pretty unassuming. Nothing more than an open-face ham and cheese sandwich, right? Not exactly. See, it starts with the bread. Locals use French bread and slather it with a garlic butter mixture. Then it’s topped with ham and – here’s where the magic happens – Provel cheese. This combo of provolone, cheddar, and swiss cheese is available almost exclusively in the St. Louis area. It’s a melty processed cheesed that browns perfectly under the broiler. Sprinkle a little paprika on top and you’re transported to the Gateway City.

We can’t create a sandwich round up and not include our city’s very own claim to fame. The Primanti Brothers sandwich gives you everything you need in one (enormous) bite: meat, tomato, onion, coleslaw, and french fries. In this city, it’s not too difficult to find a sandwich that includes a heap of fries directly on it. But Primanti Brothers is the shop that started it, and the place locals and tourists alike just can’t get enough of.

Sure, the cheesesteak is Philly’s most famous creation, but there’s another region-specific sandwich that deserves to share the limelight. The Schmitter, which originated at McNally’s Tavern, is like the extra cheesy cousin to the cheesesteak. Like the city’s #1 sandwich, the Schmitter features thin sliced beef, fried onions, and layers of cheese. But that’s where the similarities end. The addition of grilled salami, tomatoes, and a special sauce – all piled onto a hearty Kaiser roll – makes this one of our favorite creations.

The Pilgrim or Gobbler: New England

Regardless of where you live, you have probably made this sandwich before. The Pilgrim is a mix of Thanksgiving leftovers like turkey, cranberry sauce, stuffing, and gravy piled high on white bread. It’s been recreated all over the country, but it began in the New England area. We like to think that this one has the power to unite, rather than divide, sandwich lovers across the nation. So we say dig in!

mtob
How Much Does Custom Printing Cost? 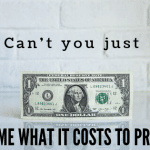 How Much Does Custom Printing Cost?