A Love for Chocolate: Why We Give Chocolate on Valentine’s Day

It seems second nature to dash to the stores every February to purchase that chocolate filled, heart-shaped box, but how did it become a staple of Valentine’s Day? Below we break down the history behind the Day of Love, and how chocolate became a part of it.

The Story behind Valentine’s Day

The day we now call Valentine’s Day is named after a Christian martyr, but it also has origins in the Roman fertility festival, Lupercalia. The Christian Church recognizes three St. Valentines. One of them was imprisoned for marrying couples in secret during a marriage ban in Roman times. As a way to Christianize the Lupercalia festival and honor the soft-hearted Saint, Pope Gelasius named February 14th St. Valentine’s Day. In fourteenth century Europe, February 14th was believed to be the beginning of birds’ mating season and added to the idea that the middle of February should be a day for romance. In eighteenth century England, exchanging love notes became a tradition on Valentine’s Day and eventually made its way to America.

The passion for chocolate has roots in Mesoamerican history. Among the Mayan and Aztecs, cacao beans were considered gold, and their sacred drinking chocolate was known as “the food of the gods.” Chocolate houses began to open in Europe in the 1600s where chocolate was advertised as a cure-all for many diseases. The Victorian era is when Valentine’s Day really began to take off. Victorians adored courtship and showered their loved ones with flowers, gifts, and love notes. In the late 1800s, Richard Cadbury, a British chocolate manufacturer, created the first “eating chocolates” and packaged them in lovely heart-shaped candy boxes adorned with roses and cupids.

Why We Give Chocolate on Valentine’s Day

The commercialization of Valentine’s Day chocolate gained popularity in America in the early 1900s. Milton Hershey, a caramel maker, began covering his caramels with chocolate and launched his bite-sized “kisses” in 1907. Russell Stover started selling his chocolates in heart-shaped boxes in the 1920s to department stores. But commercialism isn’t the only reason we see chocolate on Valentine’s Day. Chocolate has a famous reputation for being an aphrodisiac. Studies have concluded that chocolate contains a substance that mimics the endorphin Phenylethylamine, a chemical found in the brain that is produced when we are in love. Not only does chocolate taste amazing, but it actually has many health benefits as well. Raw cacao is a superfood and contains 20 times more antioxidants than blueberries and acai berries. The smell of chocolate increases theta brain waves, which trigger relaxation. Giving a box of chocolates may seem like a cliché, but if you want something truly romantic this February 14th, look no further than the mood-boosting bliss of chocolate. And don’t forget the wine!

To keep the romantic tradition going, offer an assortment candy boxes with  inserts from MrTakeOutBags.com in your restaurant or store this Valentine’s Day. 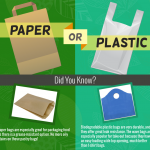 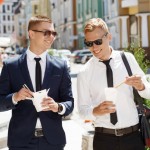 Eating Habits of Millennials: A Passion for Better, Faster Food