When it comes to disposable food containers, there is perhaps nothing more iconic than Chinese takeout boxes. Despite being a wholly American creation, it has been associated with Chinese cuisine since its inception. They are easy to produce, convenient, and they feature an attractive origami-inspired design. They also unfold into plates for your cheap Chinese takeout dinner, a little-known fact that has only been recently rediscovered.

There are a lot of reasons to love Chinese takeout containers, but where did they come from? They certainly didn’t come from China or anywhere else in Asia. Like we said before, they are an American invention. With that being said, let’s take a closer look at the history of these iconic takeout containers.

Evolution from the Oyster Pail

The earliest version of the Chinese takeout container was patented by inventor Frederick Weeks on November 13, 1894. Weeks’ invention – which he referred to as a “paper pail” – was made from a single piece of paper that was folded into a virtually leak-proof container and secured with a wire handle. It seemed to have evolved from existing oyster pail technology, so much so that modern Chinese takeout containers are still sometimes referred to as oyster pails.

The Rise of Chinese-American Food

Chinese food got its start during the mid-1800s when an influx of Chinese immigrants settled in California during the Gold Rush. This led to the establishment of Chinatowns throughout the state and, later, the country. The Chinese restaurants that were opened during this time featured more traditional Chinese cuisine instead of the Americanized fare that people are familiar with today.

Chinese food didn’t catch on with mainstream America until after World War II. Chinese restaurants during this time would often have two menus: one that featured traditional Chinese dishes and one that catered to more American tastes. The “American” food became more popular over time, and it eventually evolved into what most people think about when they imagine Chinese takeout.

As Chinese food became more popular in the cities and suburbs in the 1950s, they began to be sold in now-familiar paper containers. The surprisingly sturdy disposable food containers seemed ideal for the growing popularity of Chinese takeout. Their flat surfaces made it easy to slide food onto plates, and the practically leak-proof design made carrying sauce-heavy foods a simple matter.

Paper takeout containers have come to represent Asian cuisine throughout the United States. The containers today are usually made from solid bleached sulfate paperboard instead of paper, but the design remains relatively unchanged. You can still find them in takeout restaurants across the country, and they remain as convenient as ever, especially when you convert them into your own dinner plate. 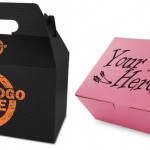 May 4, 2015
The Importance of Impression in the Food Service Business 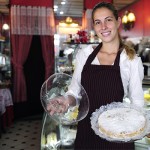 The Importance of Impression in the Food Service Business

A Cradle for Your Cake: Baking Cups Bring Ease, Style to Eateries, Events