Just outside of Pittsburgh, at the age of 15, Jeff Holmes started his early career in the car business at a dealership that his dad worked at.


Jeff started at the lowest level in the business and worked his way up through every job there... washing, waxing, changing tires, driving customers home, running for parts, cleanup, service, sales... until he eventually became the Sales Manager.


However... one day when he was 35, after constantly working 60+ hour weeks and having very little time to spend with his wife and 3 little boys... Jeff decided to leave that career behind and follow his dream of controlling his own time by owning his own business. (With a 6, 5 and 3 year old, the timing definitely could have been better, but something needed to change. Dropping off his son(s) at soccer and baseball fields and going to work on Saturday's was painfully difficult.)


Soon after this soul-searching decision, Jeff stumbled across an ad in the Pittsburgh Business Times for a sleepy little paper company that was for sale. Thinking he could turn it around, Jeff decided to take the plunge.


So, with all his savings, Jeff mortgaged every last penny he had to his name and put it on the line to get a loan. House. Car. Life insurance policies. EVERYTHING. (This too is probably frowned upon, but there's nothing like being dependent on success to get you there.)


Starting out, it was an uphill battle to say the least.


From Day 1 (literally the very first day), Jeff was devastated when he discovered that the former Office Manager of the company he just bought, who agreed to be Jeff's new Office Manager, had conveniently used critical vendor and customer information and decided to go into business for herself. Worse yet, Jeff didn't have those same Vendor and Customer files and was at a total loss of how to proceed. Trying to fight her legally would have taken many thousands of dollars and worse yet a couple of years in court, both of which Jeff didn't have.


To make matters even worse, soon after that in early December (the busiest time of the year), Jeff woke up in the middle of the night with tremendous chest pressure, like someone was standing on his chest. After a couple of ambulance rides to 2 different hospitals, Jeff learned he had pericarditis, which if they didn't get under control, would be deadly.


Luckily they did control it, and a couple of days later Jeff was released from intensive care. Barely strong enough to walk, but with some help, Jeff was back out on the road making deliveries and serving his clients, with the help of an employees friend who needed a job.


Despite these blows, and hemorrhaging money that he didn't have month after month, Jeff remained optimistic and saw tremendous room for improvement in the industry to better help local businesses.


You see... as Jeff continued talking with businesses and making cold calls, he kept noticing food service business owners complaining about how difficult it was for them to find unique products through the big suppliers. Businesses also mentioned their other suppliers had high minimums and that they couldn't get any help from their reps when it came to custom printing their logos on their packaging. And finally, another frequent complaint that was also close to Jeff's heart, was customers mentioning their suppliers didn't offer any eco friendly or green products.


In Pittsburgh as across the country, the big Food Service Distributors offered only what they had huge volume of and had no time or interest in helping small and medium sized businesses get what they wanted that varied from their vanila offerings.


That's when the light bulb went off. After listening to business owners, Jeff knew he wanted to do things differently than his competitors. That would be the key to success.


Jeff decided to provide unique, innovative and premium quality products that businesses couldn't easily get somewhere else. He also decided to add a heavy concentration of products made out of recycled materials that were compostable and or recyclable, or that were highly reusable. Jeff understood there's a downside to being on the cutting edge and that he's not going to be a fit for everybody... but that was another risk he was willing to take.


As well, he wanted to truly help businesses improve by creating head-turning custom packaging for them. Packaging is one of those products that can impact a company's success. It can change the way people see them. It can help them market their business and build their brand. It can add value to the sale and coordinate with the image they're trying to express with their business.


And... as they say, the rest is history. Sales began to climb. The business grew. Word quickly spread around the region and 26 years later, Jeff is still helping many of the same businesses he started out with all those many years ago... among helping many new clients.


Speaking of new clients. As it turns out, for the very same reasons local businesses liked working with Jeff, businesses across the country did as well. And the emergence of the internet only added fuel to the fire. So, in 2005, at the forefront of offering food service packaging online, MrTakeOutBags.com was born following the same vision.

Your best bet for help is to call us!

Experience has taught us that the best way to move forward with something like this is for you to call in and speak with one of our packaging advisors. They can discuss your sample request with you, and may even have an additional product suggestion or two.

Experience has proven that talking directly to a rep over the phone is the best way to communicate regarding Custom Printed Packaging. Call us and we'll walk you through what's needed, step by step, person to person.

If you can't talk right now, head over to our Custom Packaging Section, pick a product, and fill out the form.

When will my order arrive?

Most of our items ship from our Pittsburgh, PA warehouse - however sometimes we will ship from our sister warehouses in other locations, which can alter shipping times.


For most orders, you can refer to the FedEx shipping times map below.


If you need products by a specific date, please don't hesisitate to call us and confirm. 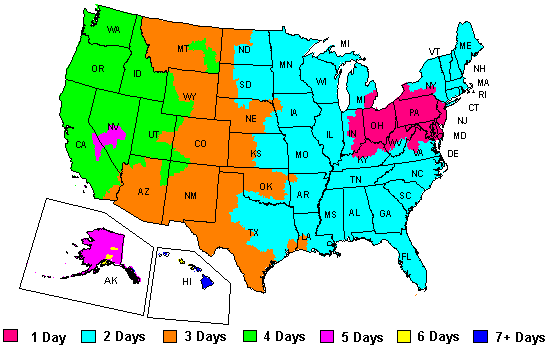 Success!We will typically respond within 24 hours, or Monday if you leave a message on the weekend.

Sign up for our newsletter and never miss a beat.

You can expect to find:

First Look at our Newest Products